Home > Spotlight > What About the Black Lives Matter Movement?
2
1
Search
Share the article:

President Randall A. Bach gives his perspective on the Black Lives Matter topic in this question and answer format.

Randall, you and the new Unity Commission have been assertive about sensitivity to the impact of racism on black people. Does that mean you personally support Black Lives Matter?

I personally avoid using the phrase, “black lives matter.” That is because of the possible confusion this phrase raises. I want to be very clear; I absolutely and passionately believe that black lives matter, but that does not mean I identify with or support the agenda of an organization that has claimed those words for its own purpose, a political agenda that goes far beyond care about black people. In short, I most certainly believe black lives matter but do not support the Black Lives Matter organization.

While I was stunned by the death of George Floyd when he was in police custody, I have been turned off by the riots, looting, and politicized Black Lives Matter agenda. Since then I would rather not support such expressions as the moment of “Prayerful Silence.” Do you want to be identified with that political bent?

I also abhor the destruction by those groups. Consider this: I love and believe in Jesus. It is my responsibility to share about Him with others. A problem, however, is that there are several groups that also claim to love Jesus but go off in unbiblical, even cultic, directions, riding on Jesus’ coattails so to speak, to pursue other objectives. So, because I don’t want to be identified with those groups, should I be mute about Jesus? I need to stand for what is right, meaning biblical, in spite of those other groups.

Please track with me; I am neither part of nor do I support groups that want to take advantage of Floyd’s death. Many of those people are quite simply anarchists who instead of wanting to contribute to our nation’s becoming all it can be want only to destroy it. But I am convicted as a Christian about letting my fear of being identified with certain political organizations keep me voiceless in the face of racism. By avoiding politics and failing to speak on behalf of God’s children of color or other minorities, Christians are actually being intimidated by and even succumbing to politics.

Why not just emphasize All Lives Matter? That is what is most important to God; He makes no racial distinction between people.

Unfortunately, there are people who very much do make a racial distinction and operate with bias because of race. God is not our problem; we are. While great legal strides have been made by our nation regarding equality of rights and liberties, our history is also undeniably full of ongoing abuses of people of color. The problem with an All Lives Matter theme is it comes from we who are part of the majority, who have not experienced discrimination because of the color of our skin. To minority people All Lives Matter comes across as additionally diminishing them, ignoring or putting down the collective pain of discrimination that all people of color experience. Here is what happens: Many white people analyze racial situations while black people feel them. That is how life works when you are so personally affected by events and experiences. People who have not suffered from discrimination can just be analytical. They have never experienced the indignity and hurt of bias against family and other loved ones. They have not experienced fear about their children’s well-being because of their color. If we have not experienced it, it is difficult for us to empathize with their feelings – but we can be emotionally distant enough to come across as dismissively analytical, even if unintended. Of course, all lives matter, but to use that expression is not helpful in expressing sensitivity to and care about people who have suffered because they are black.

Jesus virtually hectored Peter with the question, “Do you love me?” Not, do you love all people? “Do you love me?” In other words, do I matter to you, Peter? If so, then feed my sheep. There is a place for specifically directed love and care that starts with a person and then translates into care for all. When a member of my family has suffered, he or she does not need to hear from me, “Well, you know there are many people suffering like you in the world right now.” No! We personalize our love and care out of sensitivity for the hurts of that loved one. In the same way, we can care for a people group. 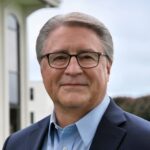 Randall A. Bach delights in opportunities to serve the Lord, including his current assignment as president of Open Bible Churches. He earned a master’s degree in organizational leadership from Regent University. Randall and Barbara, his wife, have been in ministry for over 49 years and call it “our adventure together.” Randall loves the church, pastors, and church leaders and is convinced that God loves to work through them to make disciples, develop leaders, and plant churches. A voice for Evangelicals, his work has been featured in several publications, including Ethics: The Old Testament, The New Testament, and Contemporary Application. He has also produced and edited several publications and other resources, including the Message of the Open Bible and We Believe: Core Truths for Christian Living.